Berlin is a beautiful city to visit, with heaps to do, and something to suit every type of traveller. Top of the list for a lot of people will be sights like the TV Tower, the Reichstag, or the Victory Column, all well worth seeing if it’s your first visit to Berlin. If you’ve an interest in the war, then you might head for the East Side Gallery at the Berlin Wall, Checkpoint Charlie, or the Holocaust Memorial. And that’s not to mention all the incredible museums, shops, restaurants and cafes, and much more.

You can read my previous blog posts about my trips to Berlin here.

This year’s trip was my third to Berlin–a family trip this time rather than for Maker Faire Berlin–and we had a lovely week staying in an Airbnb in Weißensee. We did all sorts, including some of the “touristy” things above, and the weather was fantastic, sunny all week and temperatures in the high thirties.

I’d travelled pretty light, and just took my little Panasonic GX9, along with the Leica 12-60mm lens and my new Sigma 60mm lens, but I’m really glad I did. Having a really limited setup forced me to focus on the photography rather than messing about with a bigger camera and loads of lenses. It’s something I’ll do more often when I travel.

What I want to write about in this post is three “different” things to do in Berlin, away from the tourist traps. I went to all three places to do some photography, which you’ll see below, but if you appreciate art or architecture then you’d definitely enjoy visiting these hidden gems.

1. Mid-Century Modern Architecture at The Hansaviertel

By far my favourite spot that I visited was The Hansaviertel. It’s a mid-century development of mostly housing, but also other buildings like churches, a U-Bahn station, and a conference centre, in West Berlin just a couple of minutes’ walk away from the edge of the vast Tiergarten park. The housing specifically is known as the Interbau, and was a competition that was part of the International Building Exhibition in 1957, attracting a host of incredible architects and designers like Le Corbusier, Oscar Niemeyer, Walter Gropius, and Arne Jacobsen.

I found out about the Hansaviertel after seeing a photo of the stairwell of the Fritz Jaenicke and Sten Samuelson building, very similar to my shot below, on the Present & Correct Instagram (it’s brilliant, by the way, and you should follow it).

The Fritz Jaenicke and Sten Samuelson building is fairly nondescript apart from its distinctive glass and yellow-painted wrought iron stairwells. The combination of the light shining and diffusing through the textured glass, silhouetting the stairs inside, and the yellow grid of ironwork, looks just incredible. I visited in late afternoon, and the sun was flooding through this stairwell from behind. 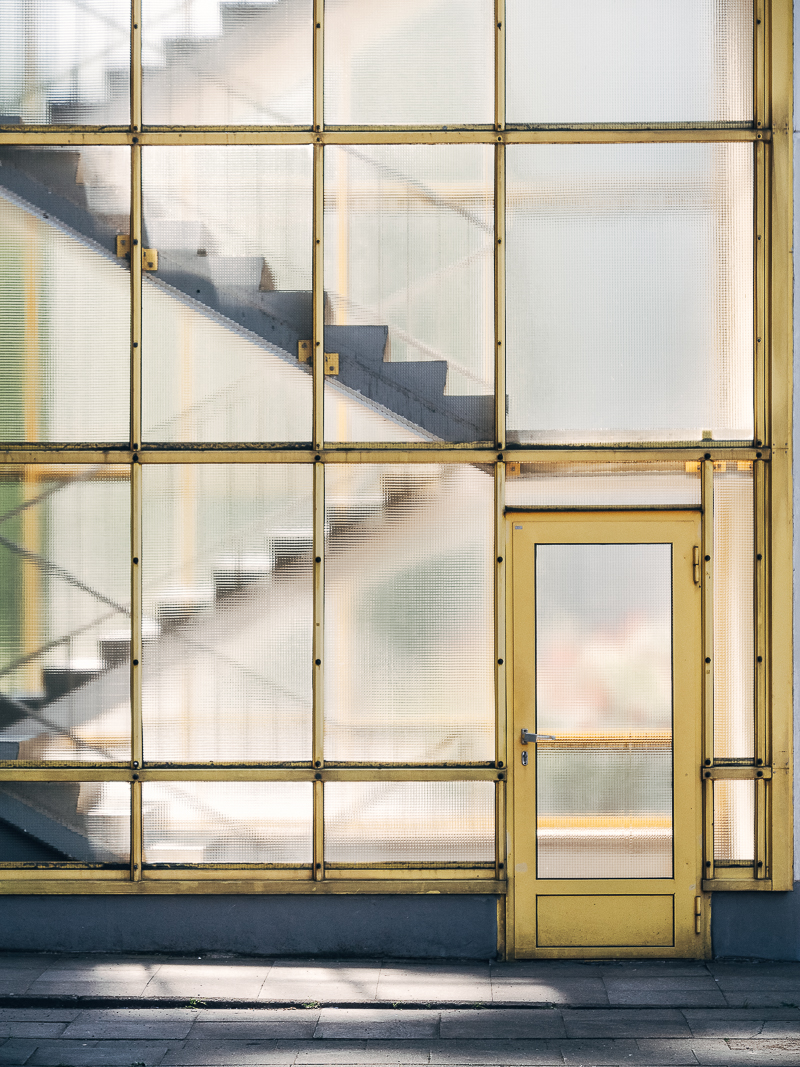 Influenced by Le Corbusier, Oscar Niemeyer’s buildings are distinctive for their bold and sweeping concrete structures, especially the v-shaped “pilotis” that support his high-rise buildings. His building at the Hansaviertel is probably the best known and most distinctive there.

The building sits floating atop several of the piloti supports, the only other connections to the building itself being the entrances to the stairwells underneath. Each stairwell (there are three or four) looks identical, with mosaic tiles either side, textured glass again, and a heavy-looking door, and each stairwell has a differently coloured door and mosaic tiles. 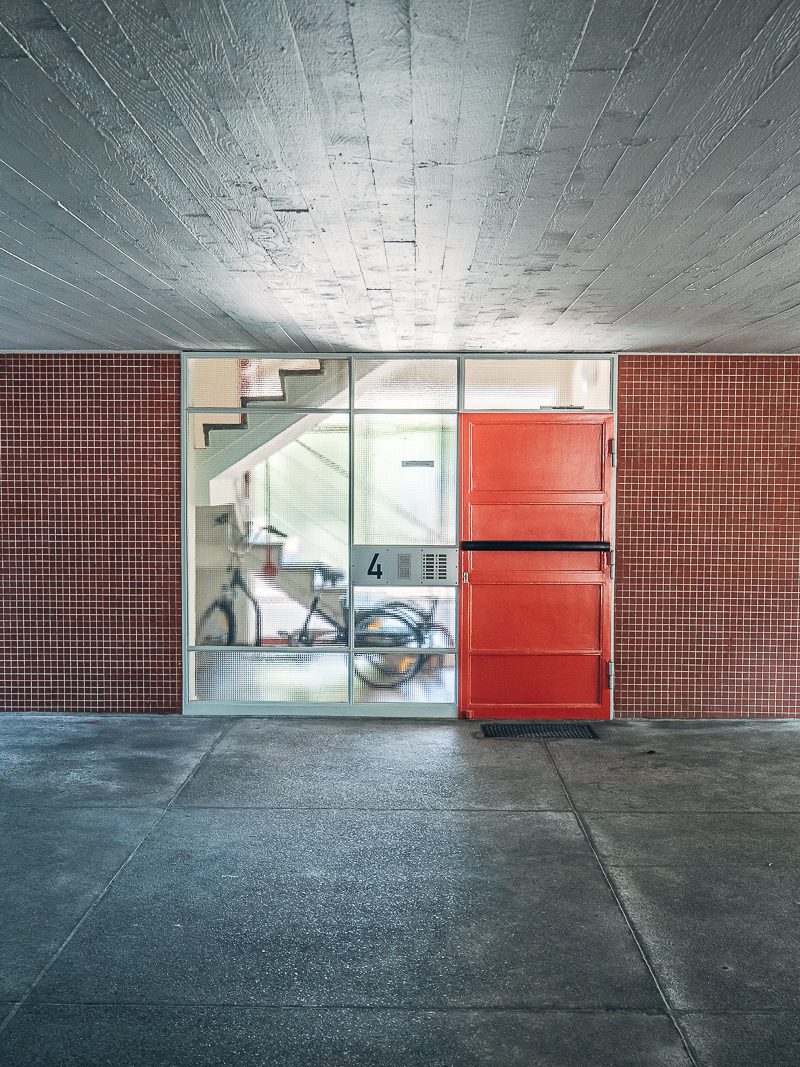 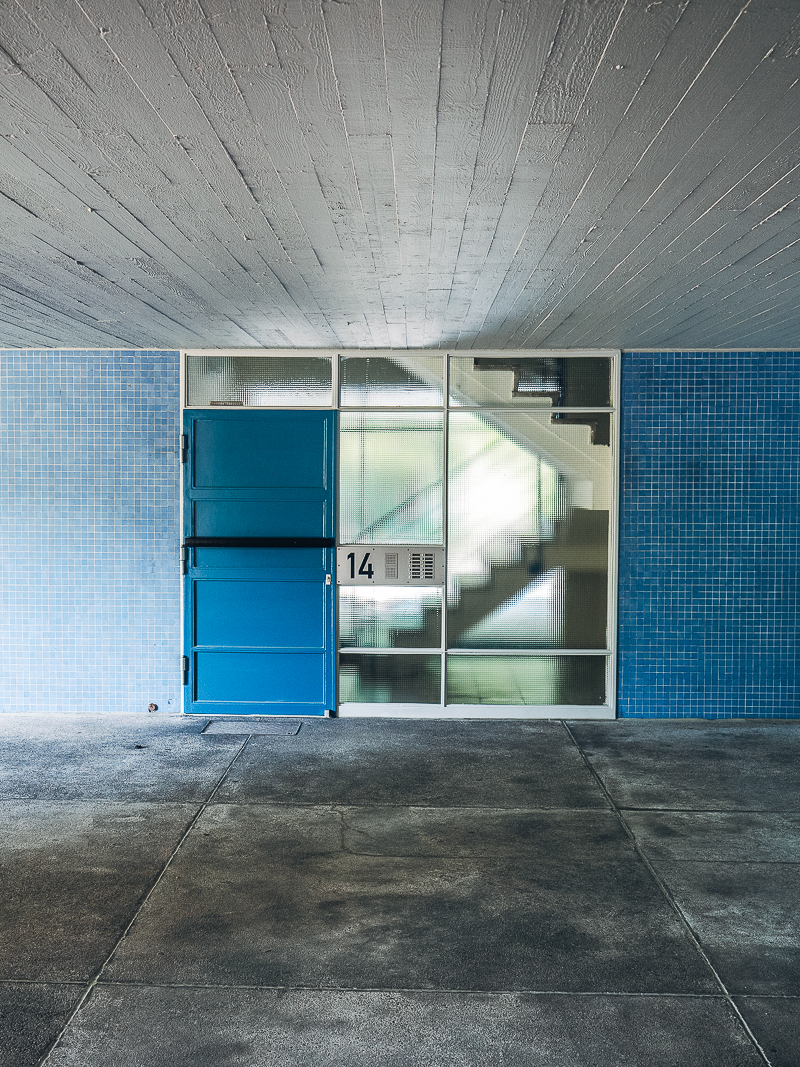 Just like the Jaenicke/Samuelson building above, I love the way the textured glass diffuses everything behind, a bit like an impressionist painting. The wood grain of the board-formed concrete make the underside of the building look really interesting too.

It’s pretty refreshing to see high-rise buildings that are actually well-kept, nice looking, and thoughtfully designed. Wandering around the Hansaviertel, it felt very relaxed and certainly a cut above most high-rises I’ve been to in the UK (we lived in one of the Dumbiedykes high-rises in Edinburgh for a while, and it was pretty dire). 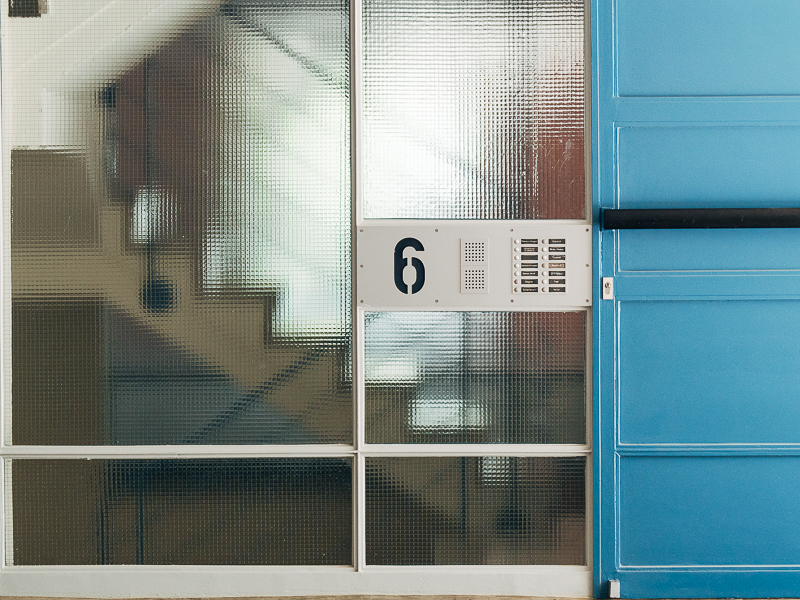 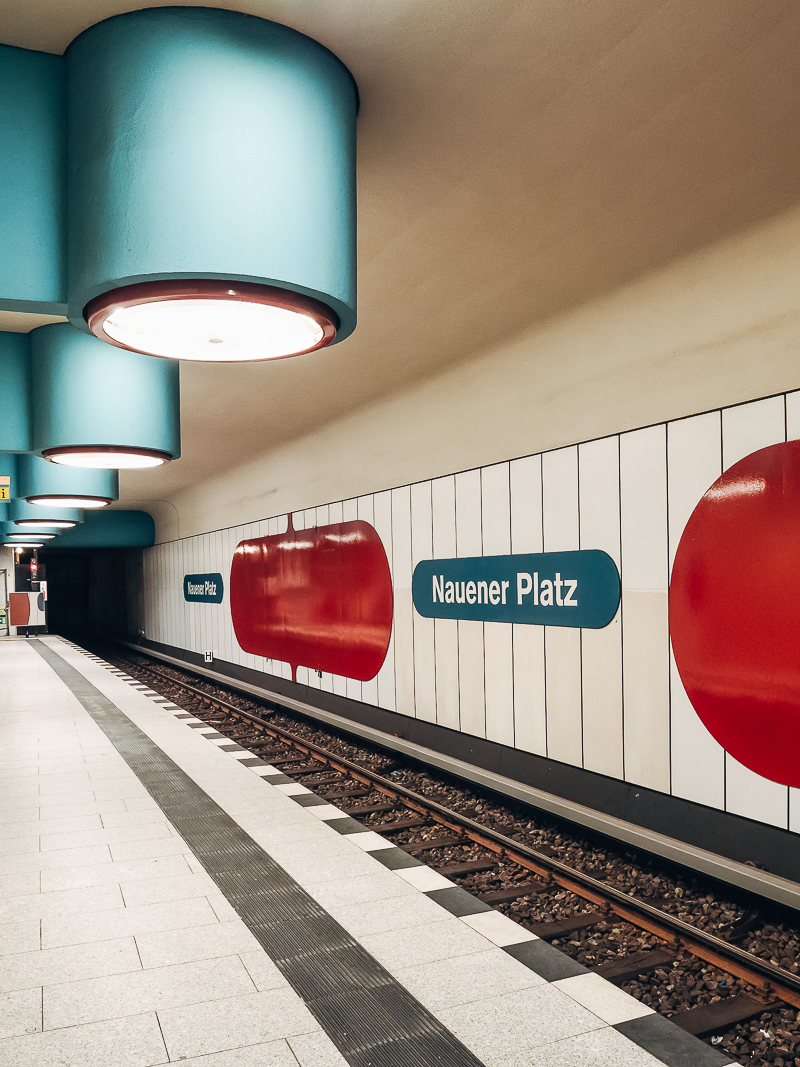 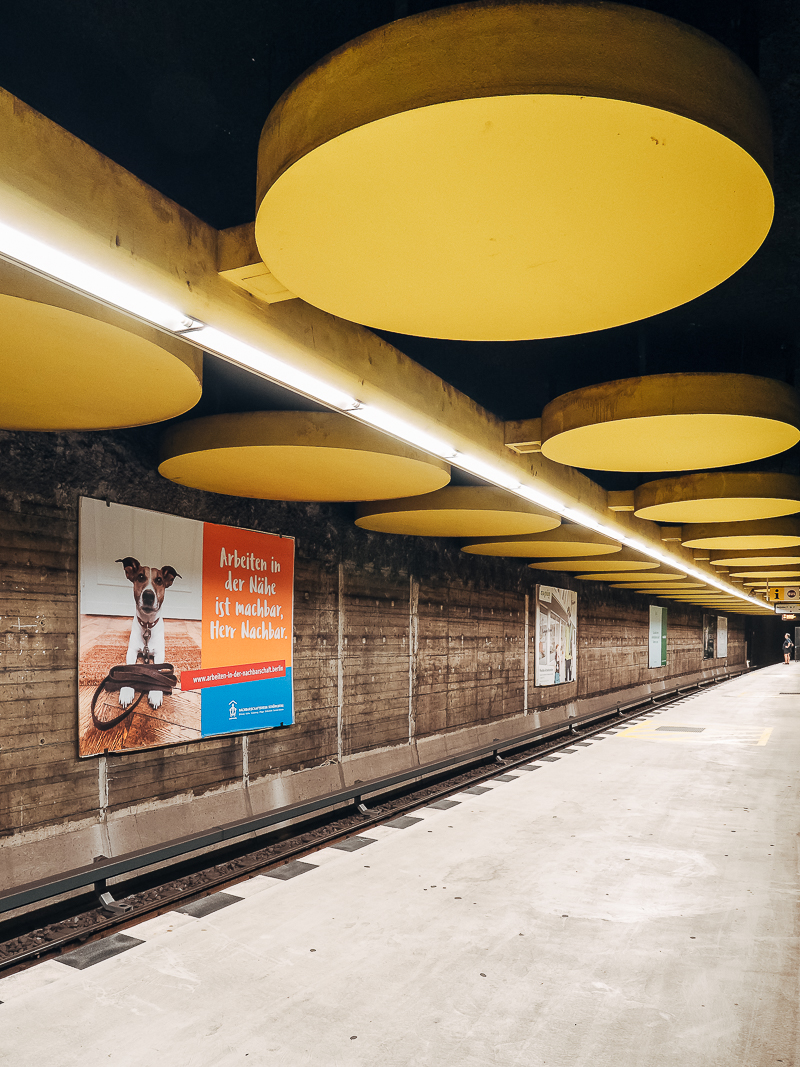 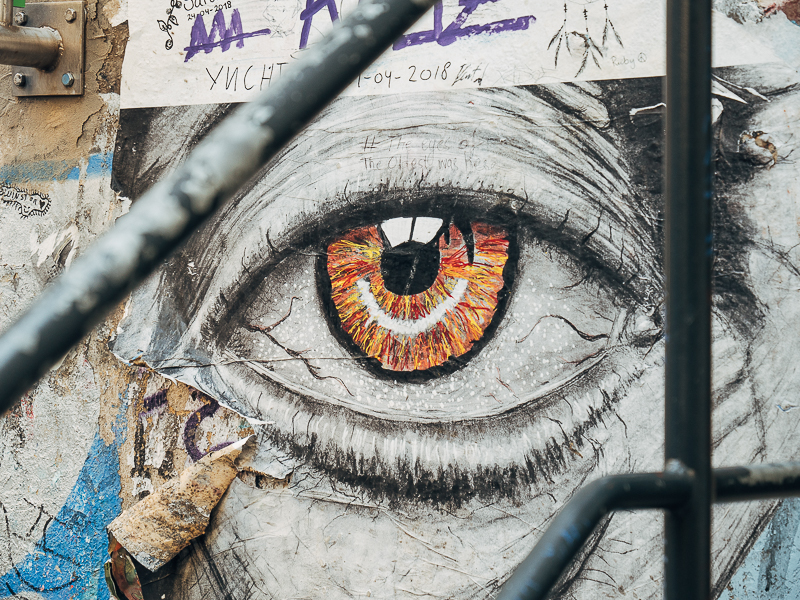 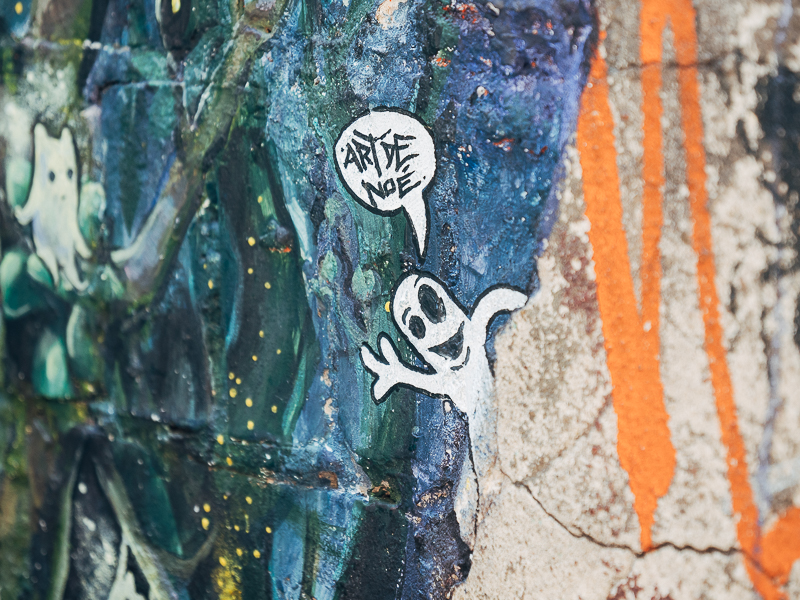