We’re just back from a lovely week in Edinburgh to visit family and catch up with some friends. For the past few years, we’ve gone to Edinburgh during the last week in August, and hence the last week of the Edinburgh Festivals. This year, we ended up not making it to any Fringe shows, but did plenty besides.

I’ve always been a fan of the Scottish Parliament building(s). To me, it’s everything that the Houses of Parliament aren’t, and all the better for it; exactly the way a modern, vibrant parliament should be. There are aspects of the building that I’m not keen on, for instance, I feel that it jars with almost all of the other buildings on the Royal Mile. However, I love the Holyrood-facing side of the building with its trees and wild flowers.

“exactly the way a modern, vibrant parliament should be” 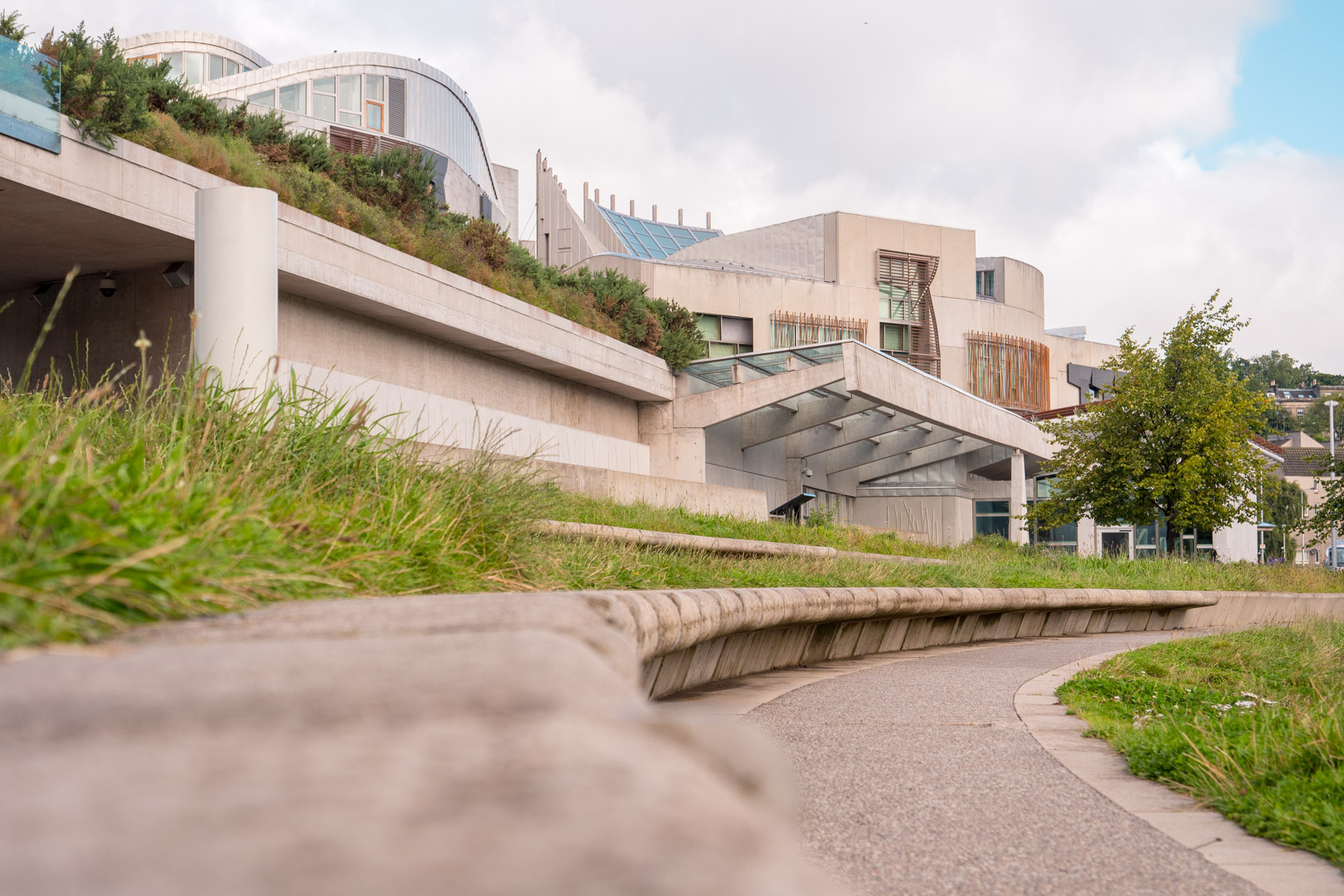 I spent a couple of mornings wandering around the front of the building, trying to get some photos that captured the way the building blends into the surrounding landscape of Holyrood Park. The one above, and the one below especially, with the buildings reflected in one of the ponds, were my favourites. 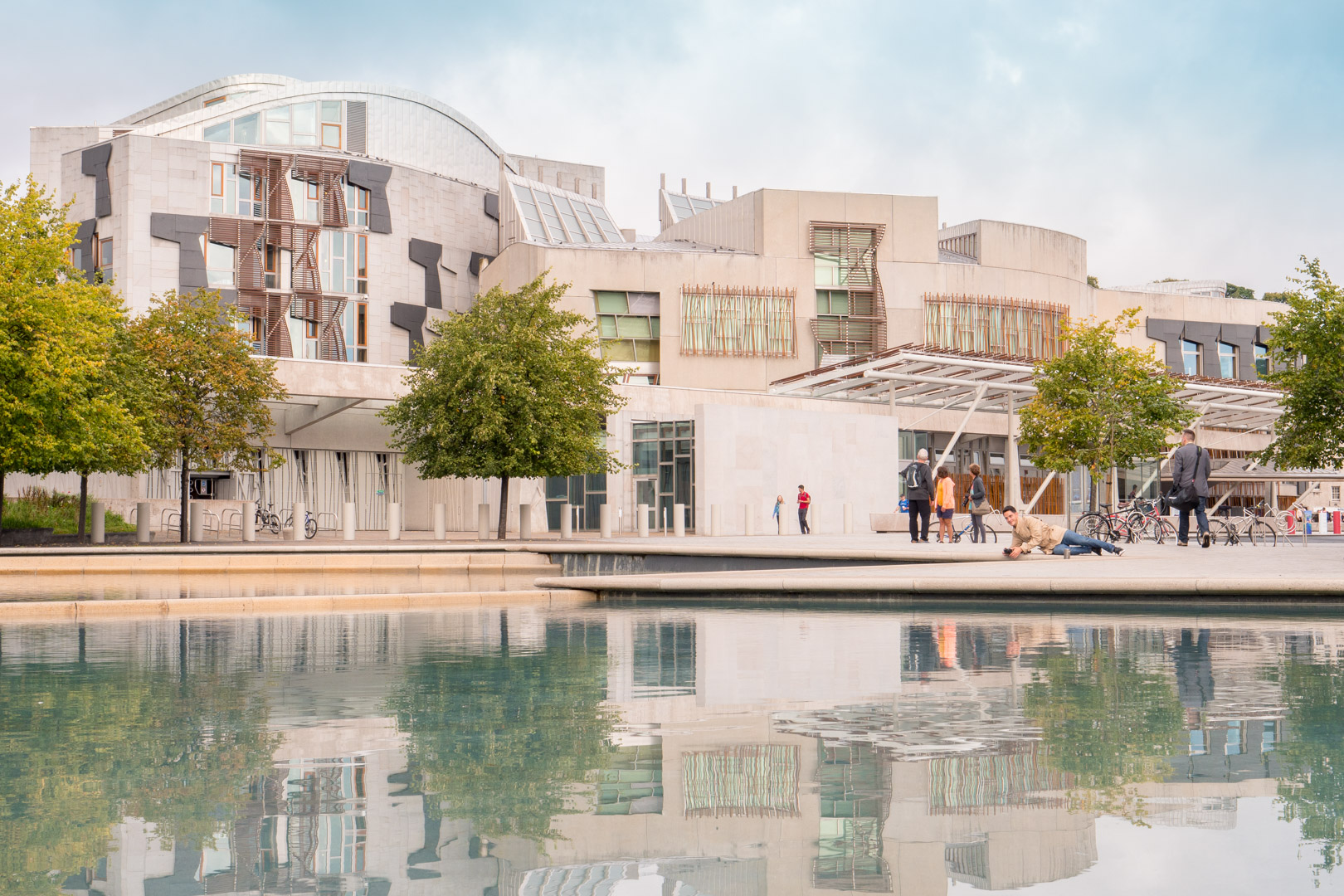 A bit of an aside on camera settings and editing.

I’ve had my new Pansonic GH5 camera for a few months now, and am just blown away by the quality of image that you get from it. The Panasonic Leica DG 12-60mm f4.0-5.6 has been my go-to lens for the most part, doing a similar job to the Tamron 17-50mm f2.8 lens that I loved so much on my Sony DSLRs. On this trip, I spent a bit more time taking some video, at the parliament and at the botanics, mostly in an effort to improve my grading and editing in Premiere Pro, which I’ve just recently started using.

Rather than shooting natively in 4k, I’ve been shooting in 1080p at 60FPS, meaning that I can get a bunch of video on my 64GB SD card (I use two 64GB cards in it, one for video and one for photos), have the option to render at high frame rate 60FPS or slow down 2.5x to 24FPS, and can still upscale my render to 4k with really good results. I’ve also been shooting in Cinelike V, which I’ve found I much prefer to Cinelike D.

In terms of editing, I’ve bought the Osiris LUTs, and have really been enjoying the KDX and M3 ones in particular. My workflow is to apply the LUT in the creative settings in Premiere Pro, then tweak the exposure and other settings until I’m in the correct ballpark, and then go back to the creative settings to fine tune the vividness, saturation, sharpness, and so on. I’ve also been overlaying some 4k 35mm film grain textures over the top to give a beautiful film look.

Ok, back to my meander about the Scottish Parliament. The first morning I spent there, taking the photos above, I’d gone to walk up the Radical Road and Arthur’s Seat in Holyrood Park. On the second morning, I’d gone to visit the World Press Photo exhibition in the foyer of the parliament which was, incidentally, an outstanding exhibition. Before the parliament and the exhibition opened at 10am, I spent 20 minutes or so taking some video at the front of the building. I’m really pleased with the way it came out.

It’s years, certainly at least ten, since I walked all the way up Arthur’s Seat, although I’ve walked up the Radical Road, below Salisbury Crags, a few times since then.

On a typically drizzly, dreich Edinburgh morning, I decided to do just that, and walked first up the Radical Road to look down on the Scottish Parliament and out over Newington, and then continued up Arthur’s Seat. The route I took is the harder of the two ways to climb up; the other is to walk up the road to Dunsapie Loch, then followed by a gentler hike up to the top of the hill. Perhaps unwisely, my route took me up the extremely steep, zig zag set of well-worn stone steps that begin at the top end of Hunter’s Bog.

“Perhaps unwisely, my route took me up the extremely steep, zig zag set of well-worn stone steps that begin at the top end of Hunter’s Bog”

Climbing up wasn’t actually too bad, since I went at a fairly leisurely pace and stopped to catch my breath a couple of times. However, it started raining more heavily once I’d started to walk down, and the smooth stone steps became more slippery than a greased-up eel. It didn’t help that I was wearing my everyday leather shoes that basically have no grip. A helpful chap, climbing up while I was struggling down, commented “You’ve got the wrong shoes on!” 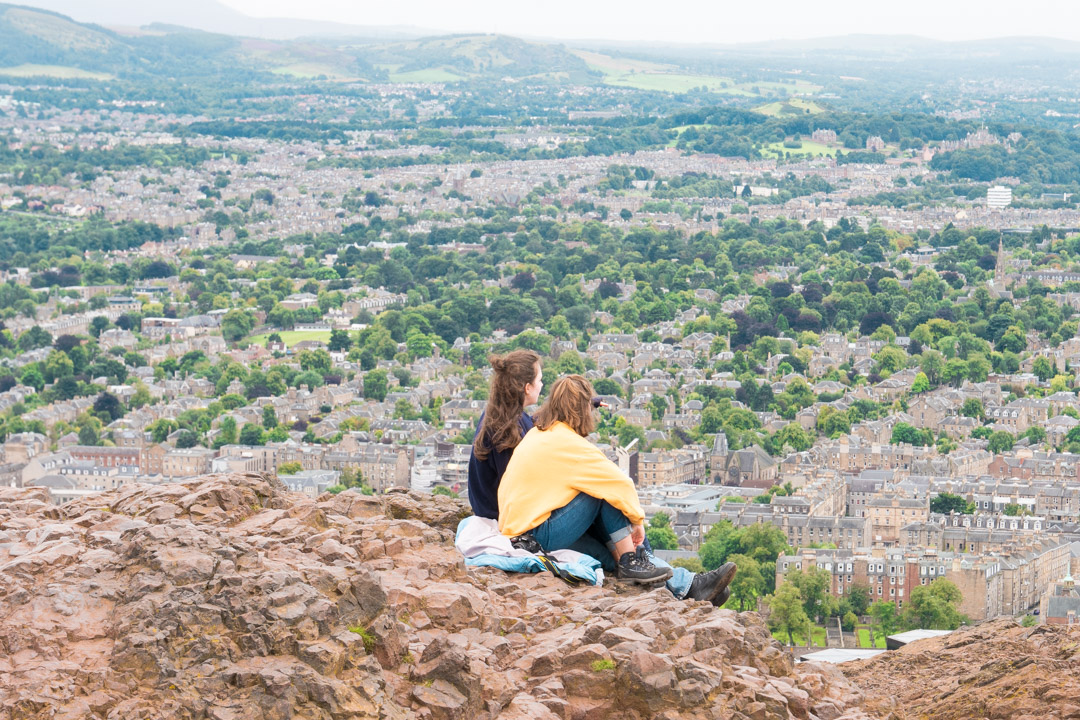 Whenever we get back up to Edinburgh, I make some pilgrimages to a few of my favourite coffee shops. Since we left Edinburgh almost ten years ago, at the time of writing, the coffee scene has burgeoned somewhat, and there’s now at least a dozen really excellent coffee shops. The three that I always try to visit are Artisan Roast on Broughton Street, Brew Lab on South College Street, and Wellington on the corner of George Street and Hanover Street.

Artisan Roast is, without a doubt, my favourite. The coffee is excellent, they have a nice little selection of cakes and sandwiches, and the place is just really cosy and relaxing. I love the laid-back service too. They don’t even have a proper counter. You order at the coffee machine, help yourself to any snacks you want, and then settle the bill on the way out. They also roast all of their own beans and offer a really good weekly or monthly subscription, to which I’ve subscribed for the past year or so. 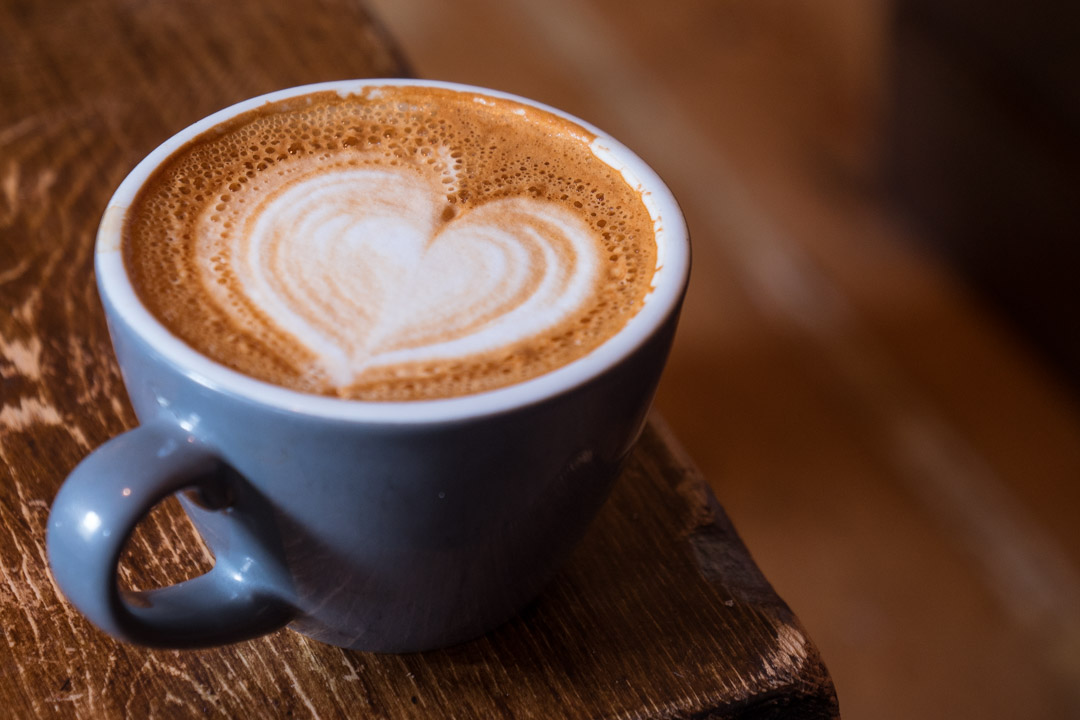 Along with Holyrood Park, the Botanics are such a vast, beautiful, peaceful spot right in the centre of Edinburgh, and it’s impossible not to get drawn in by them. I think what I like most about it is the amount of, for want of a better word, forest. It’s not just a bunch of ornamental gardens and glasshouses, but a stunning little woodland surrounded and dotted with ornamental gardens, glasshouses, ponds, and streams. 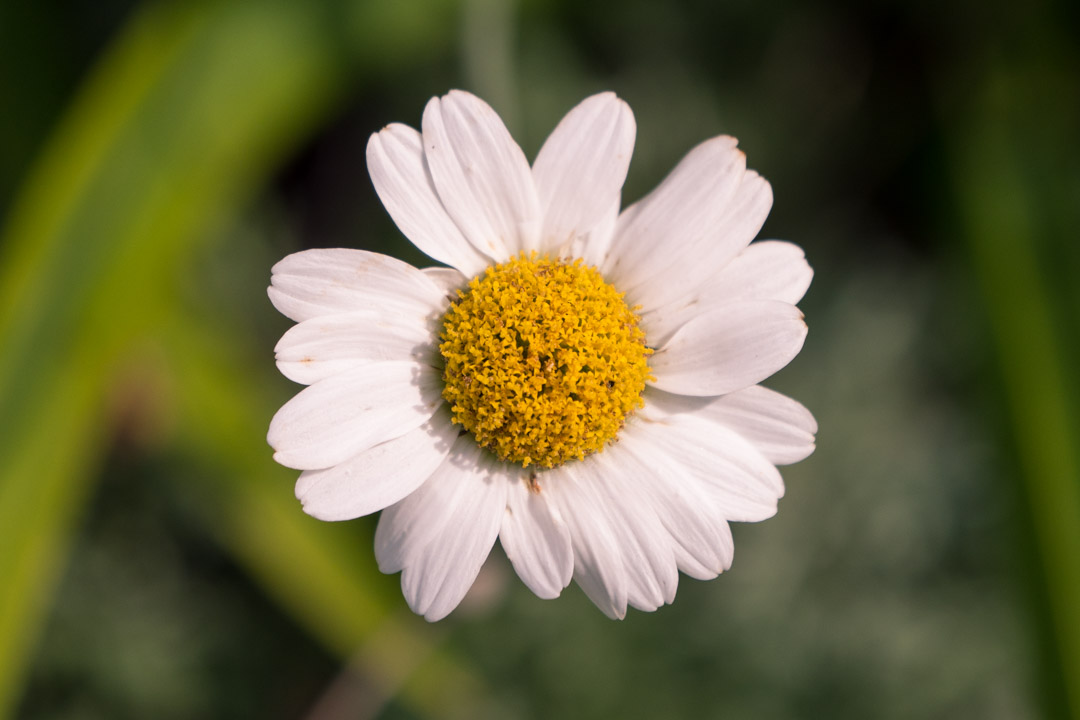 We walked from the Goldenacre gate up to the glasshouses and the newly-revamped alpine garden, then back down through the Chinese hillside, stopping to watch a handsome heron fishing in the stream, standing stock-still for a good five or ten minutes.

The alpine garden is amazing, with lots of gravel-filled planters filled with weird almost moss-like plants and tiny, delicate flowers. A new addition to it is a modern “alpine house” made out of steel beams and glass panels, with a limestone landscape underneath dotted with plants and flowers.

I also took some more video, including some shots of the heron and a few of my favourite little details, like one of the alpine moss-like plants, some pretty daisies and flowers blowing in the wind, and some autumn leaves lying in the woods.

Hopefully, we’ll be back soon. Every time I go back, I get pretty overwhelmed because I want to see and do so much, so we’ll really have to not leave it so long before we go back.